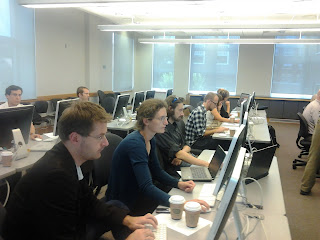 Over the two days, Ginther and Deering (along with DM's team, Martin Foys and Shannon Bradshaw) introduced fourteen users from North America and Europe to the functionality of the two tools.  These scholars received individual instruction and got to play with the tools for their own work.

For T-PEN, this was the first real-world "test drive" of our work and it yielded some excellent feedback.  We were able to observe some new user expectations when it came to work flow on a project, as well how users expected the tool to function for each main feature.  Since T-PEN is still at a pre-beta release, these testers broke T-PEN a number of times (which is what you hope for when testing); but more importantly they provided clear and helpful feedback on what they wanted T-PEN to do for them. They were all a very gracious and patient group of scholars. 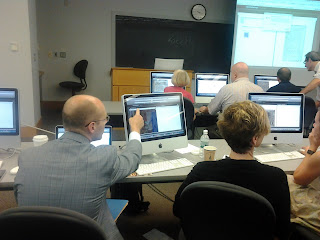 The workshop was organized by Stephen Nichols,The James M Beall Professor of Medieval French at John Hopkins University.  As a former faculty member of Dartmouth, he ensured we were treated very well and had all the necessary resources at hand.  The workshop ended with an outstanding dinner at Steve's summer home in Vermont, where we dined on exquisite food with the mountains in the backdrop.

These new users will continue to use T-PEN over the next year and will become a significant source for usability testing and feature development. The T-PEN team is honored to be working with such careful scholars, and we know the partnership will only make T-PEN better.

(A few more photos are available on Picasaweb)
Posted by quaerens at 11:32 PM 1 comment: 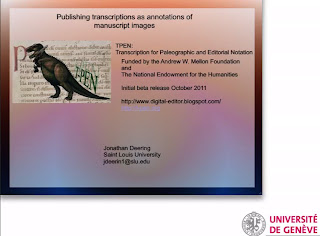 From June 22-24, 2011, the University of Geneva, Switzerland, hosted the CERN Workshop on Innovations in Scholarly Communication (OAI7).  Jonathan Deering, T-PEN's Lead Developer, gave a presentation on how T-PEN will use the Open Annotation Collaboration (OAC) Framework to record transcriptions as annotations of digitized manuscripts.  OAC is a form of RDF serialization that will permit data interchange between T-PEN and other RDF-aware applications. Jon presented the rationale for why T-PEN should adopt OAC conventions.  Not only will it permit data interchange OAC will be one way in which transcriptions can be preserved even if (God forbid!) T-PEN withers away. You can catch the audio and the slide presentation of Jon's talk, along with the equally interesting Q&A that followed on the CERN site.

Well done, Jon.  You represented the project very well, and you garnered good attention for T-PEN through this presentation.
Posted by quaerens at 10:53 PM No comments: