As we get ready for the last stage of T-PEN's planned development, Patrick Cuba, T-PEN's GUI developer has been re-designing our logo.  He was assigned this task not only because he has greater artistic talent than Jim Ginther and Abigail Firey (who developed the initial logo), but also there was a lack of clarity about the IPR of the old T-Rex image itself.  We are therefore very pleased to headline our new logo here. 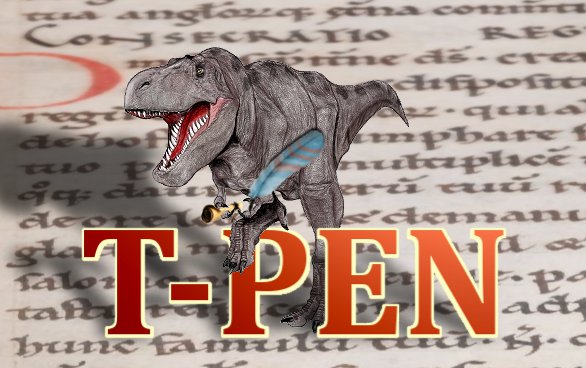 Our mascot holds both quill and scroll as he surges ahead ready to consume any and all manuscripts with scholarly mastication!  This image will sit on T-PEN's landing page with the next release due at the end of February 2012.

All other pages will have a more modest image:

The T-Rex image has been licensed from Mineo Shiraishi at dinosaurcentral.com .  The background image is from Cambridge, Corpus Christi College, MS 415, p. 171.

Project Management:
1.     Export: User's first and last names are included with the exported information when submitted to a QENI Conduit.

2.     Button Management: When a user enters an invalid XML tag name in the tag field, a warning flag will alert the user of the rule being violated. It does not prohibit the use of invalid tag names, in case XML validation is not important to the user.

Transcription UI:
1.     Display: A narrow workspace will display a condensed version of the transcription tool which features icons in place of buttons and navigation. If the browser window is widened or an oversized tool is closed, the workspace will return to normal.

2.     Lost Connection: if a connection to T-PEN is lost because of a session timeout, a server failure, or other communication issue, the page will alert the user to the problem and interrupt work that cannot be saved. In most cases, simply logging back in will allow the user to continue where they left off.

3.     New Annotation Tool: With the new Annotation Tool, users can create or update simple annotations on any project image. The Tool permits users to draw a rectangle around a significant area on a manuscript image and attach a text-only annotation. .